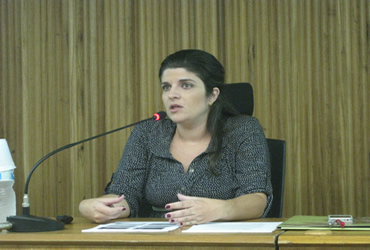 FGV EPGE – Brazilian School of Economics and Finance promoted, on May 14th, a lecture on “Indian Groups in the History of Rio de Janeiro (Vale do Paraíba, 18th-19th centuries). The lecturer was Professor Marina Monteiro Machado and the event was part of the Series of Lectures organized by the Undergraduate students.

Professor Machado analyzed the movement of borders of Rio de Janeiro State as is nowadays, emphasizing the occupation of land to the southeast. The occupation, taken place along the end of the eighteenth century, had a colonial character and gained strength at the turn of the century with the union of public and private efforts. “The viability and necessity of the construction of an Indian village reflected not only the Indian presence, but also the actual occupation and interest of other groups in occupying those lands.  This involved, for little more than 30 years, Indian groups, government agents, representatives of the Catholic Church, colonizers who already lived in those lands and sesmeiros seeking their rights and further land concessions.”

Professor Machado is graduated in History by Universidade Federal Fluminense, and received her Master’s and PhD degrees in Social History from that same Institution. Currently she is a researcher in the Rural History Center, with emphasis in Agrarian History and Indian History 18th and 19th centuries). She has published the book "Entre Fronteiras: posses e terras indígenas nos sertões  (Rio de Janeiro, 1792-1824)”.

Furthermore, Professor Machado is a member of the Brazilian team working on “Lands Overseas: Property Rights in the early-modern Portuguese Empire”, which analyzes the metropolitan policy concerning conflicts within Indian lands in Portuguese America.