Demonstrations and political reform are topics of lecture at FGV EPGE 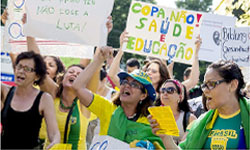 The purpose of the meeting was to discuss the recent demonstrations in Brazil, with a focus on policy reform and on the large scale events that the country will host in the coming years.

Regarding the demonstrations, Fernando commented that, for the first time in Brazilian history, the population experienced the concept, much used in Economics, of "opportunity cost" - everything that is lost when a certain choice is made.  According to him, protests began when the population realized that the funding for the construction of football stadiums could be applied in other areas, such as education and healthcare.

In turn, Mariana emphasized that other reforms should be carried out for the well-being of the population, as well as the great opportunity to discuss police role in Brazil, in view of the current historical events.

At the end of the lecture, which took place at FGV headquarters in Rio, students had the opportunity to debate their opinions and experiences regarding the demonstrations.